Hop Down the Rabbit Hole for New Year’s Eve 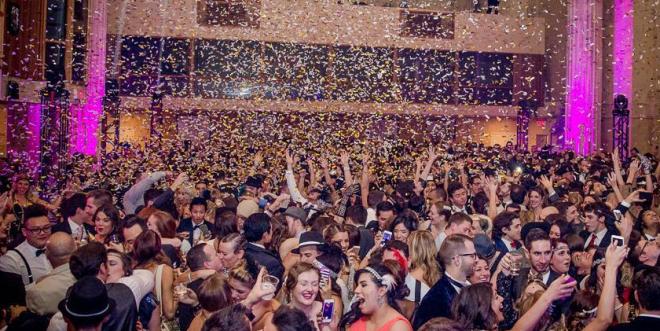 The party impresarios who threw last year’s most fabulous New Year’s event are at it again. Attendees of last year’s Great Gatsby NYE Gala experienced a level of large-scale glam seldom (if ever before) seen in Ottawa. For those whose appetites were whet by that taste of the cosmopolitan high life, this year’s Mad Hatter’s New Year’s Ball is bound to make the year-long wait worthwhile.

To get the details on what promises to be this year’s hypest New Year party, I spoke with Poppy Vineberg, one of the organizers. Poppy is the brains behind Briefing Sessions, the regular underground dance party for party-starved government drones, and a long-time patron of Couch Assassin. Along with co-organizers Tami Varma and Scott Porter, their combined experience in high-class event planning is impressive (Tami runs TC&Co Event Design and Scott owns a number of upscale restaurants and bars downtown). If their collaboration on last year’s Gatsby Gala is any hint of what’s to come, this party will be well worth the trip to the Ernst and Young Centre.

So let’s get that hard part out of the way, shall we? Transportation to the Ernst & Young Centre (out near the airport) can be a pain in the ass at the best of times, let alone on the biggest party night of the year. That’s why the organizers have hired a number of luxury coaches to shuttle your fanciness back and forth from the Byward Market (in front of Pub 101 on York at Dalhousie) to the Ball for a mere $10 round trip. That’s something like 1/8th what you’d pay for a cab, and these shuttles will be running non-stop all night. Take the damn bus. For those who insist on driving only to inevitably get caught up in the spirit of debauchery, overnight parking is free so you can cab home and return for your car the next morning. These folks rightly take the “don’t drink and drive thing” very seriously.

Upon arrival, expect to find a magical world of glitz and glamour awaiting, an Alice in Wonderland-themed fantasy nightclub. There will be a giant bar with tenders in abundance (because nothing douses the party spirit like a long wait for drinks), and fantastical set pieces to transform the otherwise bland husk of a convention centre into a dreamland befitting Lewis Carroll’s twisted imagination. “We’re going all out,” says Poppy. “We’re focusing on the guest experience, and making sure there will be something for everyone.”

In addition to over-the-top decor and ambiance, there will be circus performers and professional beautiful people roaming the floor (i.e. models and dancers), further adding to the atmosphere of altered reality. There will be live music as well as DJs, and when those midnight munchies set in you’ll have a selection of Ottawa’s finest food trucks to choose from, right there in the hall. “We’re encouraging people to go all out with the Mad Hatter theme,” says Poppy, “but we want anyone who wants to just dress up for New Year’s Eve to feel at ease whether or not they have a hat they want to wear.”

If you’ve been lucky enough to snatch up one of the limited VIP tickets, get there early to enjoy the complimentary drinks and delicious hors d’oeuvres as well as some early festivities. Yes, people actually pay for the privilege to show up early for this party, and with good reason. After all, if you’re going to get dressed up, you might as well get some mileage out of your outfit. Get your own bottle service table and you’ll even have a base camp from which to operate.

Last year’s party sold out, so don’t pull a White Rabbit and be late for this very important date. Get your tickets in advance here.